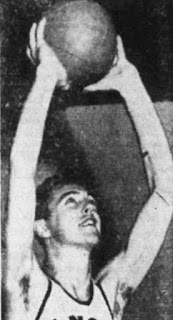 After his freshman year at Nebraska, he transferred to Kansas to play under Phog Allen, as well as pursue his education in veterinary medicine. His entered the U.S. Army in 1947, and after two years was back at Kansas.

Hailing from Millard, Nebraska, Peterson is listed in newspapers as Art through 1945, but chose to go by Gene around the time he transferred to Kansas.

Stats:
http://www.justsportsstats.com/basketballstatsindex.php?player_id=peter01
http://probasketballencyclopedia.com/player/gene-peterson/
Posted by Peach Basket Society at 11:29 AM