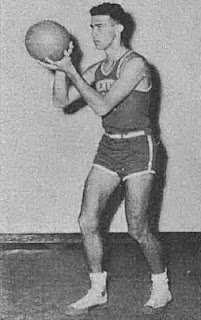 Born in Denver, Hickey grew up in San Diego and after high school entered the U.S. Navy for World War 2. After the war, he went to the University of Denver where he played basketball. After graduating, he played for the Refiners until the team collapsed. He returned to San Diego where he worked as an accountant and estimator until retiring to Lake Havasu, Arizona.

Stats:
www.justsportsstats.com/basketballstatsindex.php?player_id=hickepa01
http://probasketballencyclopedia.com/player/paul-hickey/
Posted by Peach Basket Society at 4:23 AM