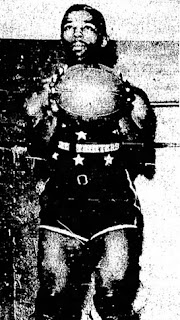 Some places have his birthdate as Feb 23, but most records, including his military records, has January 31.

Born in Philly but raised in Brooklyn, Sealy spent many years playing on predominately black basketball teams. He was with the Rens when they joined the NBL, and played in the ABL the next season before returning to the Rens who were an independent team again. Sealy served in the Army Air Corps during World War 2.

http://www.justsportsstats.com/basketballstatsindex.php?player_id=sealyth01
Posted by Peach Basket Society at 4:30 AM