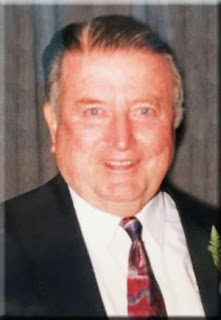 Born to James and Nellie Mulvihill in DC, Mulvihill attended Gonzaga Prep and then moved on to Fordham. After serving in the Marine Corps during World War 2, during which he also attended Rochester, Mulvihill finished his education at Fordham. He played one season in the NBL, for Oshkosh. An injury essentially ended his career (although he did play briefly in the East Coast League a few years later) and he moved back east. He moved to Clifton, New Jersey, and Bob took a teaching job at St Peter's Prep in Jersey City, where he stayed for 37 years until his retirement. He moved to Wayne, New Jersey, in 1960, and lived there for 45 years.

Bob married Leona Rizzo in 1949 and they had eight children.

http://www.justsportsstats.com/basketballstatsindex.php?player_id=mulvibo01
Posted by Peach Basket Society at 6:56 AM