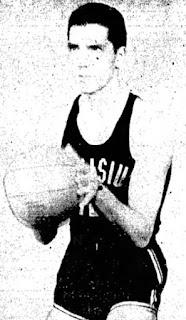 O'Keeffe enrolled in Canisius, but when World War 2 came around, he enlisted in the U.S. Navy and was placed in their pre-flight (V-5) program that placed him at RPI, where he played basketball for two seasons. After his discharge, he returned to Canisius to finish his education. He played a few seasons of professional basketball, and in 1969 was involved with Buffalo business man Jack Ahearn in bringing a professional franchise to Buffalo. He was a successful insurance agent, starting his own business in Buffalo before moving to Florida where he worked as a real estate agent. He retired in Savannah, Georgia, where he died in 2011.

He was married to Bonnie and they had six children. After Bonnie's death, he remarried to Pamela in 1984.

Stats:
http://www.basketball-reference.com/nbl/players/o/okeefhe01n.
htmlwww.justsportsstats.com/basketballstatsindex.php?player_id=okeefha01
Posted by Peach Basket Society at 6:51 AM