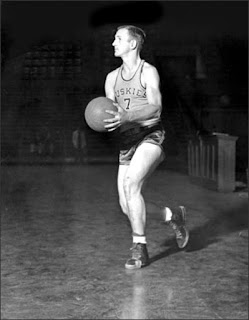 Born in Wisconsin, Gilbertson's family moved to Everett, Washington, when Gilbertson was 3. He grew up playing basketball, football, baseball and tennis. He was a basketball star at Everett HS, where he was on the state championship team in 1940. He went on the UW, where his remarkable collegiate career was interrupted by the draft and World War 2, where he served in the Philippines. He returned to UW and played professional basketball for Seattle in the Pacific League. He and his family moved to Wisconsin in 1948, and Boody signed with the Sheboygan Redskins. He moved back to Washington in 1949 where he became a CPA.

He married Beverly Pearson in September of 1948 and they had four children.

Stats:
http://www.basketball-reference.com/nbl/players/g/gilbeme01n.html
http://www.justsportsstats.com/basketballstatsindex.php?player_id=gilbebo01
Posted by Peach Basket Society at 7:45 AM

Email ThisBlogThis!Share to TwitterShare to FacebookShare to Pinterest
Labels: 1948-49, over 90, PCBL, Sheboygan Redskins