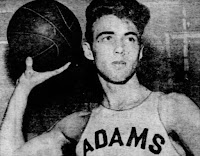 A star at John Adams, Slattery found his high school basketball end abruptly when the coaching staff at Adams HS walked off the job before the end of his senior year. Slattery had been offered scholarships to various colleges (St John's, Ohio State, Bowling Green, Annapolis), but they were all rescinded when his grades dropped during his senior year. In September of 1951, he was dealt more bad luck when his father, Michael, died suddenly. Unable to play college ball, he was approached to play professionally with the Washingon Capitols in December of 1951. He played in three games and the team disbanded shortly thereafter. He joined the New Jersey Americans, an independent club featuring Alex Groza and Gerry Calabrese, but the club disbanded before play. In 1952, he got called in to tryout for the New York Knicks, but was one of the last cuts prior to the 1952-53 season. He would stay in sports as a referee and an umpire (he was even a umpire in Major League Baseball when the regular umpires went on strike and replacement (i.e. scab) umpires were brought in. He worked as a bartender and a host at the Richmond Inn in Queens for many years, well-known for his outgoing personality.


Stats:
Posted by Peach Basket Society at 10:08 AM