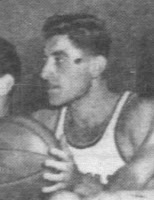 Smith was at CCNY as the school was involved in the point-shaving scandal that rocked the sport in the early 50's. Arnold was not free of controversy, himself. Although not involved in point shaving, he was booted from the team in December of 1951 when it was discovered that his admission records had been altered. Smith then joined the Guards when they took Carbondale's place in the ABL. He scored six points in his only appearance with Middletown on January 27, 1952. He was drafted by the Rochester Royals in the 1952 NBA Draft, but never suited up with the club.


Stats:
Posted by Peach Basket Society at 10:58 AM