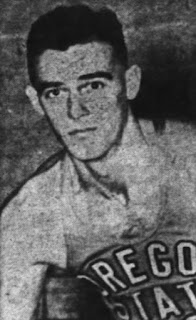 Petersen enrolled at Oregon State but enlisted in the Army in May of 1943. After serving during World War 2, he returned to Oregon State where he played basketball. After graduating, the 6'5 Peterson took a job as the coach for the basketball team at Astoria High School. However, after one year, he resigned the post, wanting to continue his education at Columbia in New York. While out east, he played a couple years of basketball. After finishing his doctorate at Columbia, he returned to Oregon, being hired at Southern Oregon to coach football as well as assistant professor of science. He only coached football there for three seasons, and also coached basketball a of couple seasons. He worked as a professor for many years at Southern before retiring.

He and his first wife had four children. He remarried to Lois Pye in 1977.

He sometimes appears in articles as "Alvy" Peterson.

Stats:
Posted by Peach Basket Society at 5:11 AM