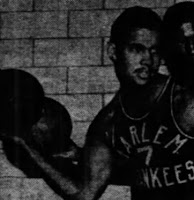 Not much I can found with regards to the true identity of Vic Hansen. What really muddies the water is the Hall of Fame player / coach from Syracuse who was an active coach around the same time in the same state.6'2, 195 lbs

He became a respected boxing coach and had a field house named after him in his hometown of Jamaica, Queens.


Stats:
Posted by Peach Basket Society at 8:16 AM