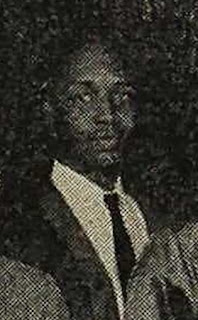 Skinner was an All-American at Columbia in 1944-45 before joining the Army. After his duty, he returned to Columbia and was one of the highest scorers in school history. He would go on to play pro basketball for a few years around New England. He earned a Masters Degree from the Harvard School of Business shortly thereafter and found work with Time-Life, but left after a year to go into business for himself.

Skinner ran into serious legal trouble later in the 1950's. In 1957, he was barred permanently from dealing in securities in the state of New York due to fraud allegations, and in 1959, he was arrested five times and charged with auto theft and fraud.

Stats:
Posted by Peach Basket Society at 6:20 AM