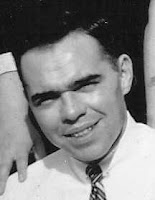 Hannon entered the military in 1945, and after his discharge returned to Villanova. He would play for the Scranton Miners in the ABL before playing and coaching in the Eastern League.

He married Terese Jordan and they had three sons.


Stats:
Posted by Peach Basket Society at 7:04 AM