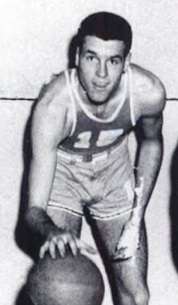 Born in Somerville, Massachusetts to Alonzo and Anna Goodwin, Ken was a star basketball player in high school before playing at URI. After graduating, Goodwin received interest from the Boston Celtics and was assigned by them to play with the Hartford Hurricanes. However, Goodwin's lack of defensive skills lead to him being cut but by the Hurricanes prior to the start of the season.. In 1950, he entered the army and served during the Korean War. He played a couple seasons with the Manchester British Americans in the ABL, teaming up with his older brother Don for a season. While back in New England, he got his master's degree in education from Springfield College and worked for many years as a teacher, administrator and coach in Springfield, Vermont, and South Windsor, Connecticut. He left education to go into business, and retired and moved to Florida in 1990.


Ken married Sally Keleher in 1950 and they had four sons and a daughter.

Stats:
Posted by Peach Basket Society at 7:58 AM