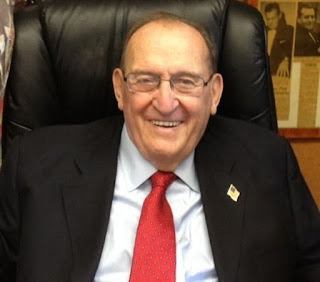 After leading Cliffside HS to the state basketball title. Calabrese enlisted in the U.S. Navy and spent three years fighting in World War 2. After the war, he entered St John's where he starred on the basketball court. He played two years for the Syracuse Nationals before returning home to Cliffside. He was elected to the Borough Council in 1955, and 4 years later he was elected mayor of Cliffside, a post he held for over fifty years. He suffered a debilitating stroke in December of 2013, and his son Thomas served in his place until Gerry's death in April of 2015.

Stats:
https://www.basketball-reference.com/players/c/calabge01.html
http://www.justsportsstats.com/basketballstatsindex.php?player_id=calabge01
Posted by Peach Basket Society at 11:27 AM