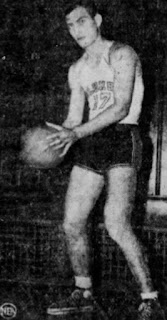 After graduating from Columbia in 1951, Lewis played in the ABL while going to Columbia law school. He played one game for Bridgeport before being sent to Carbondale.He would eventually move to Arizona to practice law.

Stats:
Posted by Peach Basket Society at 6:02 AM