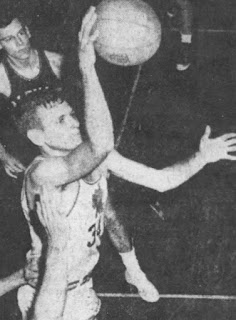 The 6'4 Goodwin was born to Alonzo and Maude Goodwin in East Orange, New Jersey, and thefamily moved to Somerville, Massachusetts shortly after Don was born. He served in the military after World War 2, and enrolled at Tufts University after the war. He was selected all-New England in basketball while at Tufts and after graduating he would play basketball with the Manchester British Americans in the ABL. He would work at Rex Lumber Company in South Windsor, Connecticut, eventually being promoted to General Manager and Vice President. He retired and split his retirement between Charlestown, Rhode Island, and Long Boat Key, Florida. Goodwin died in 2008.

Don married Ruth Fitzgerald and they had five sons.

Stats:
Posted by Peach Basket Society at 7:39 AM