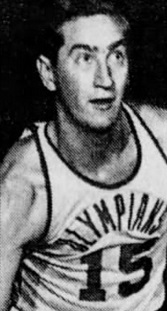 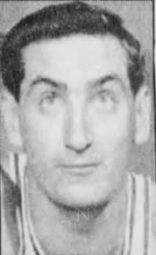 Groza was a member of the Fabulous Five at UK, and aside two NCAA titles, he also won a gold medal in the 1948 Olympics. After college, he signed with the Indianapolis Olympians of the NBA. However, in 1951, he was implicated in a point shaving scandal that was enveloping the college game. He admitted to shaving points while playing at UK, and was immediately banned for life from the NBA.
After almost a decade away from the game, Groza became the head coach at Bellarmine College (now Bellarmine University). Groza was at Bellarmine for seven seasons before leaving to join the front office of the ABA's Kentucky Colonels. He even found himself filling in for two games as head coach in 1970-71. He moved on to San Diego where was GM and also coached for part of the 1974-75 season following the departure of head coach Wilt Chamberlain. After the ABA merger with the NBA, Groza stayed in San Diego, working with Reynolds International. He died of cancer in 1995.

He was married to Jean and they had two sons and two daughters.


Stats:
http://www.basketball-reference.com/players/g/grozaal01.html
http://www.justsportsstats.com/basketballstatsindex.php?player_id=grozaal01
Posted by Peach Basket Society at 11:47 AM