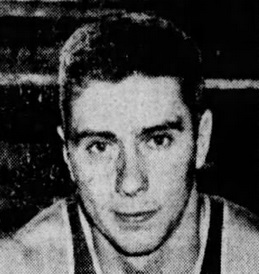 Rennicke played baseball and basketball at Drake, and after graduating he was signed by the Chicago Cubs and was assigned to their C-level affiliate in Sioux Falls. He was also drafted by the Tri-Cities Blackhawks in the 6th round of the 1951 draft. (The team moved to Milwaukee prior to the start of 1951 season but after the draft.) Rennicke did not make the club, and signed with Elmira in the ABL. He was let go in January, and returned home to Iowa when he got his offer from the Hawks and joined the club on January 30, 1952. He played six games for them before being released. He played another season of minor league baseball, this time with the Cubs' Topeka club.

Stats:
https://www.basketball-reference.com/players/r/rennijo01.html
http://www.justsportsstats.com/basketballstatsindex.php?player_id=rennijo01
Posted by Peach Basket Society at 5:49 AM