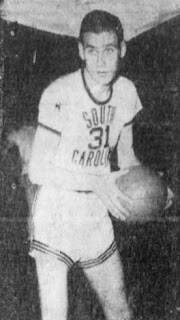 Born in  Bristol, Tennessee, to John and Vera Slaughter, Jim and the family moved to Roanoke around the time of World War 2. He graduated from Jefferson High School and went to South Carolina where he was selected twice All-Southern Conference and also All-American. He left South Carolina in March of his senior year to pursue all-star basketball tours. Slaughter was drafted in the fourth round of the 1951 NBA Draft by the Blackhawks, and the 6'11 center signed with the club on July 19, 1951. The Hawks, having changed their name since moving to Milwaukee in the period since the draft, waived Slaughter on October 29, 1951, before the beginning of the season. He headed to the ABL, signing with the Washington Capitols in early December, 1951. After a little over a month later, after the Capitols folded, he was picked up by the Manchester British Americans, who joined the ABL as a replacement team. I am not sure he got into a game with them, however. He signed a sort time later with the Baltimore Bullets, making his debut on January 19, 1952. In the 50's and 60's, he would still play semi-pro and amateur basketball, but his career was now working at J.P. Stevens.