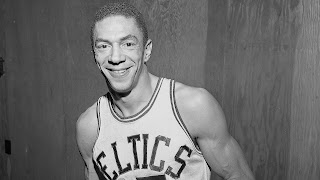 Born in Oakland, Barksdale went to Berkeley High School but was cut from the basketball team every year there (some people say he wasn't skilled enough, others say it was because he was black.) Undeterred, he went to Marin JC and made the team, and after two years there he transferred to UCLA. After one year there, he went into the U.S. Army to serve during World War 2. After his service, he went back to UCLA, where he was an All-American in 1946-47. He started playing independent basketball after leaving UCLA, and eventually was selected to play on the 1948 Olympic team. After helping the team to the gold medal, he returned to Oakland to play on various indy and AAU teams. In 1951, he was signed by the Baltimore Bullets, becoming the fourth black player inthe NBA. Two years later, Barksdale joined the Boston Celtics but after two years, his career was cut short with chronic ankle problems. He worked in radio for many years, and was also a key figure in the Oakland schools for his fundraising to save Oakland athletic programs. Barskdale died of throat cancer in 1993, and was posthumously elected to the Naismith Hall of Fame in 2012.

Stats:
https://www.basketball-reference.com/players/b/barksdo01.html
http://www.justsportsstats.com/basketballstatsindex.php?player_id=barksdo01
Posted by Peach Basket Society at 11:35 AM