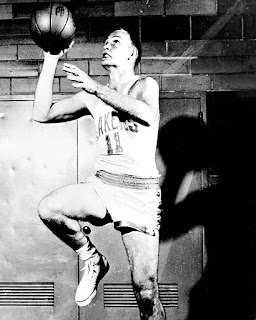 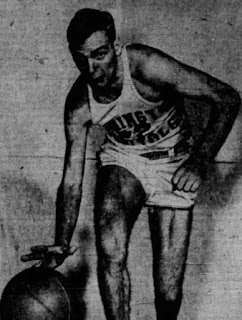 Schnittker grew up in Ohio, playing football, basketball and running track in high school. He could have gone to Ohio State for football, but chose to play basketball instead, although he was talked into playing football one year when injuries besieged the Buckeyes. Schnittker caught a toughdown pass in the 1950 Rose Bowl, but it was on the basketball court he made is real impact at OSU. He was drafted by the Washington Capitols, and followed the team when they moved to the ABL. However, after two seasons of pro basketball, Dick entered the U.S. Army to serve in the Korean War. When he returned, the Capitols were no more and Schnittker joined the Lakers. He played for Minneapolis for five seasons. He eventually settled in Wisconsin and became quite a skilled amateur golfer.


Stats:
https://www.basketball-reference.com/players/s/schnidi01.html
http://www.justsportsstats.com/basketballstatsindex.php?player_id=schnidi01
Posted by Peach Basket Society at 6:17 AM