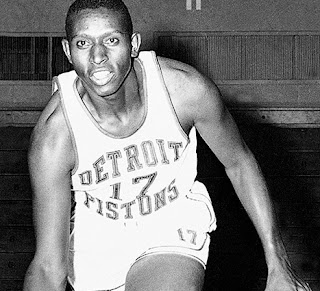 Lloyd became the first black player in the NBA when he debuted with the Caps on October 31, 1950. Chuck Cooper and Nate Clifton followed in the following few days. However, just 7 games into the season, Lloyd was drafted into the military and was headed off to Korea. After the Korean War came to a close, Lloyd returned to find the Capitols had folded, so he signed with the Syracuse Nationals. After six season in Syracuse, he played one more season for Detroit before retiring. He returned to the Pistons in 1968 when he became the first black bench coach, and in 1971 was the NBA's second black head coach. He was fired part-way into his second season with a dismal 22-55 record. He remained in Detroit for a while working with the city. He was elected into the Hall of Fame in 2003.