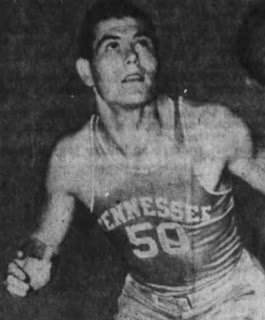 After playing at Central High School in Nashville (one article said he went to East, but not sure of its accuracy), Burris served in the U.S> Navy during World War 2, getting his training at the Great Lakes Academy. After the war, we attended the University of Tennessee. The center starred at Tennessee for four years, including leading his team to an upset of Kentucky, Burris went on to play for the Fort Wayne Pistons. In February of 1952, Burris was traded along with $10,000 by Fort Wayne to Milwaukee for Dick Eddleman.


Stats:
https://www.basketball-reference.com/players/b/burriar01.html
http://www.justsportsstats.com/basketballstatsindex.php?player_id=burriar01
Posted by Peach Basket Society at 10:03 AM