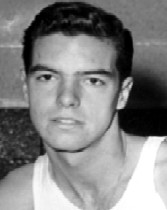 Born in Irvington, New Jersey, Kiley grew up in Newark before going to Seton Hall Prep. He went on to play basketball at Syracuse, scoring just under 1200 points, and was a second round draft pick of the Fort Wayne Pistons.

He later worked for many years as a sales rep for the BBL Division of Becton Industries, Bristoil Laboratories and Johnson and Johnson. He died in 1982 following a lengthy illness.

He married Jane Pfaff and they had two sons and a daughter.

Stats:
https://www.basketball-reference.com/players/k/kileyja01.html
http://www.justsportsstats.com/basketballstatsindex.php?player_id=kileyja01
Posted by Peach Basket Society at 10:44 AM