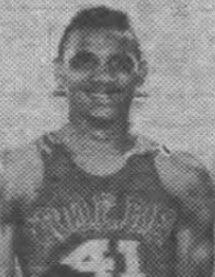 After playing at the University of Toledo, helping the Rockets to the NIT title in 1943. He then entered the U.S. Army and served during World War 2. After the war, he transferred to UCLA and played pro basketball with the Oakland Biitners before being signed by the Baltimore Bullets in the NBA. He played the next season with the Milwaukee Hawks.

Davage married Ollie Mae Carter and they had at least one daughter.

Stats:
https://www.basketball-reference.com/players/m/minorda01.html
http://www.justsportsstats.com/basketballstatsindex.php?player_id=minorda01
Posted by Peach Basket Society at 8:20 AM