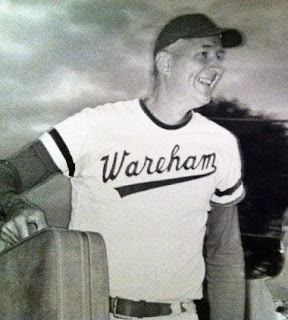 After high school, where Lyons was a basketball star (he held the city scoring record until broken by Wilt Chamberlain) as well as a baseball star, Eddie enrolled at Temple but quickly went off to the U.S. Army to fight in World War 2. The war ended a couple months after Lyons enlisted, and he was discharged and signed to pitch in the Cincinnati Reds farm system. At this time, he also played pro basketball in the ABL to keep fit in the off-season. He was a fixture around New England on the ball diamond, playing for 18 years not just there but also in Canada and the Mid-Atlantic states, but he never made it to the major leagues. He would become a coach in the Cape Cod league and was inducted into their Hall of Fame in 2000 as the second-winningest manager in league history. He would also coach high school and college baseball, as was a mentor and a positive role model for scores of young athletes. He and his wife, Kay, had three daughters, but they always joked that they also had hundreds of sons.


Posted by Peach Basket Society at 7:58 AM