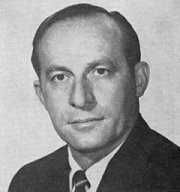 Drucker played three seasons in the ABL, Drucker would go on to make his biggest impact as a referee in the ABA and NBA. He served as the supervisor of officials in both leagues, and as integral in helping the leagues merge not just teams and players, but officials also.

He married Shirley Elias and they had one son.

Stats:
Posted by Peach Basket Society at 11:37 AM