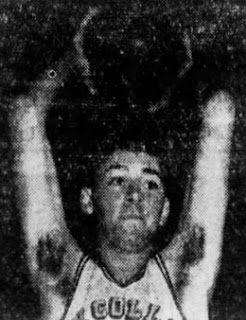 Laub played one year at CCNY but was declared ineligible after that season. The engineering student was able to get his eligibility restored and he rejoined the school team in 1941. After the 1942-43 season, Laub entered the U.S. Army and served during World War 2 as a member of the Army Corps of Engineers. After his discharge in 1946, he played one year with the Troy Celtics in the ABL. He would go on to work in the construction field for many years before finally retiring in 2014 at the age of 93.

Email ThisBlogThis!Share to TwitterShare to FacebookShare to Pinterest
Labels: 1946-47, Living, over 90, Troy Celtics