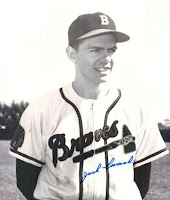 Cusick signed to play baseball with the Philadelphia Phillies out of high school in 1946, and the shortstop would slowly rise through the minors over the next few seasons into the St. Louis Cardinals, New York Yankees, Chicago Cubs and eventually the Boston Barves farm systems. Known as a all-field-no-hit player, he kept in shape in the off-season by working in a shipyard and playing basketball. He played with the Elizabeth Braves in the ABL in 1946-47.

Cusick reached the Major League with the Chicago Cubs in 1951, batting a paltry .177. He was traded to the Boston Braves after the season and only hit .167 with that club in 1952. He found himself out of baseball after the 1952 season, only 24 years old. He became a New Jersey State Trooper in 1953.


Stats:
Posted by Peach Basket Society at 4:47 AM