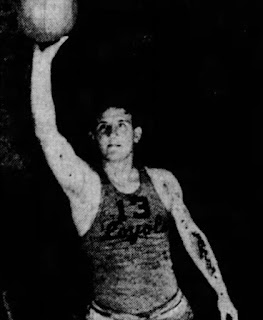 Born to Victor and Marie Bock, Vic grew up in Baltimore and played basketball at Calvert Hall HS. After graduating from Loyola Univesity, he entered the U.S. Army and served his country in combat in the Pacific, seeing action in places like Saippan. The 6'3 Bock played for the Baltimore Bullets alongside his brother Franny after the war. Franny and Vic had been teammates for virtually their entire basketball-playing careers. Vic took a job as a purchasing agent at Bartgis Brothers in Baltimore, leaving the sport behind.

On June 3, 1951, Bock suffered a heart attack but survived. He returned to work almost three months later, but suffered a second heart attack at home on September 3, 1951. This time, it was fatal. He was only 31 years old.

Bock had married Jean Rawlings and had one son, but the marriage ended in a divorce. He remarried to Rose Mary Zephir, just a week before his death.


Posted by Peach Basket Society at 7:08 AM