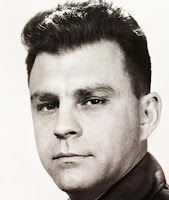 Scheinkman had to leave school in 1941, so he joined the Army. Assigned to the Air Corps. He was a navigator on supply planes, and after the war played basketball for the Troy Celtics and in France. When the Air Corps became an independent force known as the U.S. Air Force, he served in the Korean War as well. Aside from flying planes into Hurricanes for research, he would work as a fireman in New York City. He would move to Arizona and continute his education and would become an advocate for geriatric rights and pensioners, dying in 2015 at the age of 95.

He married Gerry Malloy and they had a son and a daughter. After her passing, he remarried to Helen Cook.

Email ThisBlogThis!Share to TwitterShare to FacebookShare to Pinterest
Labels: 1946-47, over 90, Troy Celtics