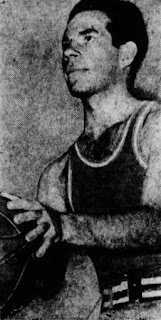 Dolgoff was a Brooklyn native who starred on the hardcourt at St John's in the late 1930's. After serving in the military during World War 2, he played basketball professionally for the Elizabeth Braves. Dolgoff would become an accountant, and as a CPA he developed the well-known (in accounting circles, at least) Dolgoff Plan in 1962. The plan was developed to help companies with deferring tax deductions and payments. The Plan still exists today in a corporation run by his son. When Dolgoff was brought on as the accountant for the American Basketball Association in the late 1960's, he used a similar plan to help the league compete financially with the established NBA. The ABA began signing players with a salary plus a lengthy annuity, hedging on the league's long-term viability. The gamble paid off as the ABA was able to lure away talent from the NBA, and therefore began to put better teams on the court and this would lead to an eventual merger.

Stats:
Posted by Peach Basket Society at 9:30 AM