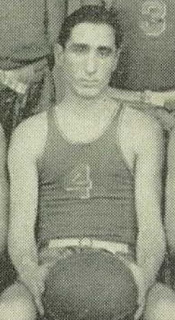 A pitcher and football player as well as a basketball player in high school, John lead his school to the 1940 state championship. In the 1938-39 season, his grades were not high enough to make him eligible to play on the school team, so he played in the local YMCA league with older players. Once his grades got back up, he returned to the school team but was declared ineligibile for the year due to his YMCA stint. He enter the USMC to serve his country in World War 2, seeing action in various battles in the South Pacific. After the war, he played semi-pro baseball

Stats:
Posted by Peach Basket Society at 5:48 AM