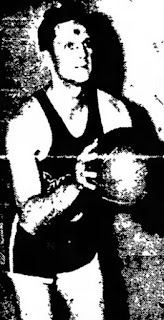 Dinkwoods started the 1946-47 season with the Kingston Chiefs and when the Newark Bobcats relocated to Kingston in December of that season, Dinkwoods was one of the players brought into the fold. He played with the club through the winter, even as the team moved again to Yonkers. When the club dissolved in February in 1947, he played a few games with the Troy Celtics. He also played semi-pro baseball around New York and was a skilled amateur golfer. He was later a superintendent at the A&P Plant in Brooklyn and later near Elmira, New York.

He sometimes appears in newspaper article as "Dinkwood" but his anglicized name was actually "Dinkwoods."

He and his wife, Sally, were together for a long time before marrying in 1972.

Stats:
Posted by Peach Basket Society at 6:49 AM