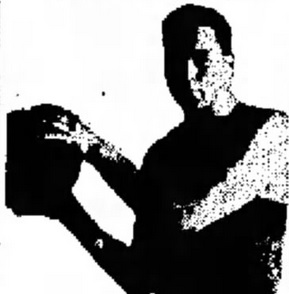 
One of nine children born to Andrew Gustav (1882-1942) and Anna Katherine Broberg Strand (1882-1979). Aside from being an excellent basketball player, Strand was also a champion diver and semi-pro baseball player. A local legend in Warren, Strand joined the Penns late in the 1937-38 season.
After his playing days, the 6'4 Strand stayed active in basketball by running a well-renown basketball camp at the Erie Boys Club in Erie, Pennsylvania, known for its rugged training regiment. He also owned and operated a construction company
He was married to Ann D. Strand (1909-1993).


Stats:
http://www.basketball-reference.com/nbl/players/s/stranre01n.html
http://www.justsportsstats.com/basketballstatsindex.php?player_id=stranre01
Posted by Peach Basket Society at 4:17 AM