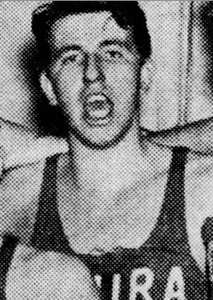 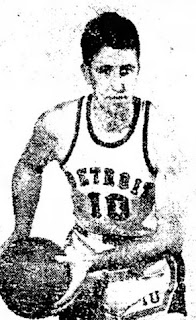 Started with all we knew. Name and NBL teams played for. So the search begins, with Arthur Hyatt and searching through Pennsylvania and Ohio. That's where I found a 1978 obituary for Pitt basketball star Charley Hyatt, who was an all-time AAU star after his college days. The obituary mentions two surviving brothers, Mansfield and Arthur. As good of a lead as any. At the time of the obituary, the boys' mother, Ivy, was still alive but in the hospital. Arthur was still living in Pittsburgh, and Charley went to Uniontown High School in Pennsylvania. Mansfield died in 1986. Ivy died in 1984.
An article from the Evening Standard in Uniontown High School says that Arthur Hyatt, Charley's brother, was a "chip off the block", referring to his basketball skill. This is much more indicative that this is the right Arthur Hyatt.
Mansfield "Manny" Hyatt's obituary from the Pittsburgh Gazette in 1986 indicates Manny was the former owner of the Pittsburgh Raiders in the 1930's and was the president of Oshkosh in the NBL for a while. He is survived by his brother Arthur in Pittsburgh (at this point, we also get a middle initial for Arthur: G.
1940 and 1930 census record show Arthur was born around 1913, and his father was Charles  Dee Witt Hyatt, mother Ivy Graves Hyatt (1887-1984), living on Clarissa Street in Pittsburgh.
Using this info, I found Arthur G. Hyatt, born 1912, married October 20, 1942, to Yvonne Colenso. He enlisted in the U.S. Army in 1942.

12/14/2015
Looks like Art moved to Washington. I found this record of an Arthur Hyatt death. Burial in Washington, but connection on death certificate to Pennsylvania. Birthdate is in the right range.
https://familysearch.org/ark:/61903/1:1:JPD1-9W5
Checked deeper and found Yvonne Hyatt is also buried at same cemetery (1915-1988). Marriage record matches Yvonne's birthdate on grave.
https://familysearch.org/ark:/61903/1:1:VF74-R36
http://www.findagrave.com/cgi-bin/fg.cgi?page=gsr&GSiman=1&GScid=76949&GSfn=&GSln=hyatt

We have found Arthur.


Stats:
http://www.basketball-reference.com/nbl/players/h/hyattar01n.html
http://www.justsportsstats.com/basketballstatsindex.php?player_id=hyattar01
Posted by Peach Basket Society at 10:32 AM