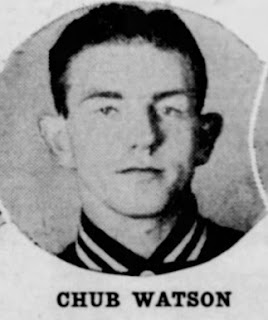 Played one game for Pittsburgh, putting up 16 points.

Were there two Watsons at Marshall at the same time?

Chub played basketball at Marshall, as well as being a catcher on the baseball team. He played football there, too, despite having never played prior. After college, he played professional basketball and also coached high school football at St. Mary's Catholic School in Clarksburg, WV, in 1940. He coached at Marshall University for a while before becoming an FBI agent in Fairmont, West Virginia. Married to Maxine Watson.

- Update 8/17/16 -
Thanks to a family member, I got his full name and that he was definitely born in Jane Lew.

Stats:
http://www.basketball-reference.com/nbl/players/w/watsoch01n.html
http://www.justsportsstats.com/basketballstatsindex.php?player_id=watsoch01
Posted by Peach Basket Society at 6:25 AM