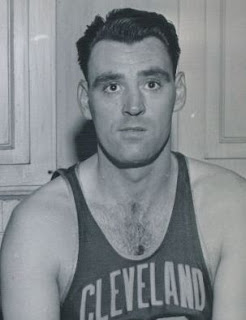 Born in Scotland, Moir's family came to the United States when John was six years old. He didn't play basketball until after high school when he enrolled at Trott Vocational School. He played a little in an industrial league before attending Notre Dame. He was an all-American in all threee years he played at Notre Dame. After graduating, he took a job with Firestone and played on their basketball team for three seasons. He moved over to play with the Rochester Seagrams, but World War 2 ended the Seagrams' season. After the war, Moir returned to the NBL to play for Cleveland. His playing days ended and he went to work for Carlisle Rubber and Tire, where he worked until his death at 58 years of age in 1975.
He married Marjorie and had two daughters and a son.


Stats:
http://www.basketball-reference.com/nbl/players/m/moirjo01n.html
http://www.justsportsstats.com/basketballstatsindex.php?player_id=moirjo01
Posted by Peach Basket Society at 5:30 AM