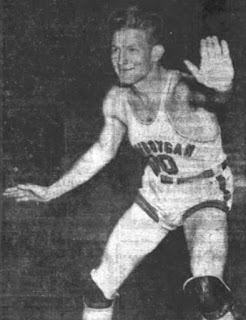 Born in Iowa to John F. Suesens (1885-1930) and Martha Duran. He played basketball at Iowa, and during his senior year he ruptured a blood vessel at practice and spent four days in the hospital. He went on from Iowa to a long successful career with Sheboygan, leading them through the 1943 NBL championship. He requested and was granted a released from the Redskins in December of 1948 so he could join the Seattle Athletics of the Pacific Coast League, but the team (and the league) folded after the season, and Suesens returned to the Redskins, this time as the head coach and part-time player. He coached the team as it joined the NBA in the following season, and one more as the team moved to the smaller NPBL. From there, he spent seven seasons as the head coach at Valpo. An avid golfer, Suesens was the golf pro at the Pine Hills Country Club in Sheboygan until retiring in 1982. It was on a journey to said golf club to play a round of the game in 1992 that he suffered a fatal heart attack.

He served in the navy during World War 2, spending his days on the Yorktown.

Stats:
http://www.basketball-reference.com/nbl/players/s/sueseke01n.html
http://www.justsportsstats.com/basketballstatsindex.php?player_id=sueseke01
Posted by Peach Basket Society at 4:38 AM