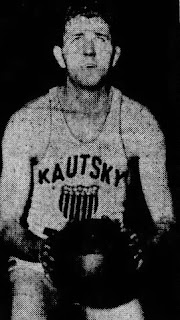 
Another one that I had no information, but came back a few months later with fresh eyes. Seeing that he went to Central Normal College, I found an article that said he was from Auburn, Illinois. A search into census records lead to a possible identification, but considering how common his name is, I needed more confirmation. I checked the parents of the suspected-Dave and found his mother's obituary. From Auburn herself, it mention her son was a Central Normal student. Bingo.

Born in Auburn, Indiana, to Grover (1885-1918) and Martha (1887-1936) Williams, Dave was only five years old when his father died of pneumonia. His mother Martha remarried in 1934, but she was tragically killed in a house fire just two years later.

Stats:
http://www.basketball-reference.com/nbl/players/w/willida01n.html
http://www.justsportsstats.com/basketballstatsindex.php?player_id=willida01
Posted by Peach Basket Society at 7:50 AM