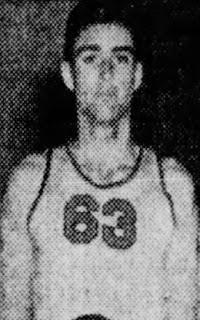 Parker, a 6'5 center for Lousiana Tech, entered the U.S. Navy in 1942. After World War 2, he was discharged and finished his schooling back at Tech. After graduating, he returned home to Birmingham, where he would play basketball for the Birmingham Steelers of the Southern League.
6'5 center at LA Tech

Posted by Peach Basket Society at 5:02 AM