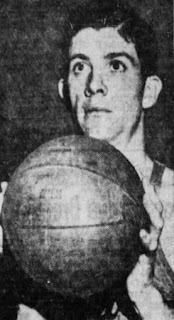 
In 1951, Northeast Community College in Booneville, Mississippi, was trying to win the JuCo National Basketball Championship. Coach Bonner Arnold recruited is friend, Johnny Stroud, to play for him. Stroud, who averaged 20.8 and 17.3 PPG in the Southern League a couple years prior, was a dominant force in the tournament, scoring 24 points in the semi-finals and 44 games in the final, which Northeast lost. Later, the school had to forfeit its runner-up trophy due to Stroud's professional stint in the Southern League.

Posted by Peach Basket Society at 4:43 AM

Email ThisBlogThis!Share to TwitterShare to FacebookShare to Pinterest
Labels: Incomplete, SPBL, under 50