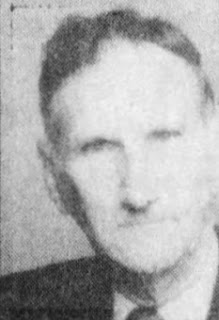 Born to John and Evelyn Menton, Bill grew up in Passaic, New Jersey. He went to Spring Hill on an athletic scholarship, playing baseball, basketball and football. He graduated in 1942 and began coaching. He would work as a Mobile County juvenile probation officer and during this time he played basketball for the Mobile Gulls and also worked as a scout for the Cincinnati Reds. He was also a sportscaster for a Mobile radio station and was the play-by-play announcer for the local minor league baseball team, the Mobile Bears. In the mid-60's, he was the general manager for the semi-pro Mobile Tarpons of the North American Football League. He became Bayou La Batre's police chief before embarking on a career in politics. In 1982, he was elected to the Alabama Senate, and in 1988 served as the Mobile County Commissioner.

Senator Menton married Carmen Santana in 1945 and they had 8 children.

Posted by Peach Basket Society at 6:02 AM