He was one of the high-scorers in the league, so I was surprised I could find so little about him. I knew he served in the USMC during World War 2, but searches came up blank. 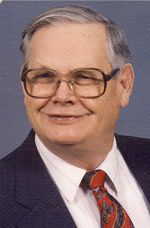 Then when I saw a reference to a lot of players on the Whiz Kids being from Palmerdale, that lead me to Clyde Raymond Carter, whose obituary indicated he went by "Raymond." This Carter was born in Illinois to Clyde, Sr., and Nell Carter, but the family moved to Alabama by 1935 and in 1942, when Junior went into the Marines, he was living in Palmerdale, Alabama. So all this pieces fit. I sent an email to a family member for confirmation, but i like this identification enough to say it is so. To make things even more likely, his brothers-in-law were fellow Whiz Kids Lindsey Oden and Herb Spitzer.

Ray was a superintendent at the local Powermatic Plant in McMinnville, Tennessee.

He and his wife, Faye, had four children.

Posted by Peach Basket Society at 4:59 AM