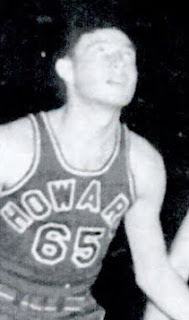 Born to Polish immigrants Morris and Olga Epsman in Birmingham, Alabama. He attended Howard College in Birmingham before going off to war. After the war, he returned to Howard, except now the college was known as Samford University. He would play a season with the Birmingham Vulcans.

Posted by Peach Basket Society at 6:21 AM