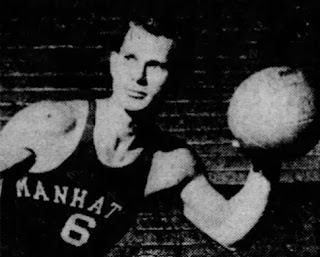 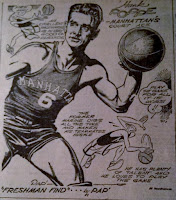 Henry "Hank" Poppe entered the U.S.M.C. after high school, serving his country during World War 2. After the war ended, we went to Manhattan, where he was the high scorer on the basketball team. After he graduated, he singed on with the Aces in the ABL, and when the club moved to Carbondale part-way into the season, Poppe went to Bristol in the Eastern League. However, he was released and banned by the EBL when he was arrested in January of 1951 for his involvement in a point-shaving scheme that would rock college basketball to its core.

Poppe, along with Jack Byrnes, were arraigned on multiple felony charges of fixing games and conspiring to fix games. They had approached a college athlete by the name of Junius Kellogg with an offer of $1000 to shave points in an upcoming Manhattan game. Kellogg went to his coach, and they went to the police. In a sting, Kellogg set up Byrnes and Poppe and they were arrested, along with a couple of gamblers. This began to unravel the mystery around the game, and lead to many arrests and charges covering fixed outcomes to baskteball games over the past few seasons involving many school and players. Poppe would eventually be given a suspended sentence, but he was banned from basketball for life.

Stats:
Posted by Peach Basket Society at 6:38 AM