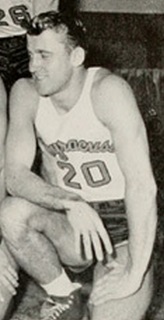 Born to Makary and Ida Suprunowicz, Dick graduated from Mont Pleasant High School and got a scholarship to Syracuse. He enlisted in the U.S. Navy and served during the Korean War. He played one game for the Elmira Colonels of the ABL, and worked for many years as a math teacher and assistant principal. He also coached the basketball team (as well as gold, bowling and tennis) for six years at Mont Pleasant High School before moving on to Linton high school where he taught math and eventually became the assistant principal.

His brother, Makary, played at the University of Michigan and later for the Denver Refiners in the NPBL. His younger brother, Walt, played basketball at Holy Cross. His son, Bill, played for Syracuse University in the 1970's.

Dick married Lorraine MIller in 1951 and they had a son and a daughter.

Email ThisBlogThis!Share to TwitterShare to FacebookShare to Pinterest
Labels: 1951-52, Elmira Colonels, over 90