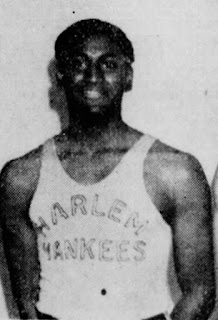 A veteran of many seasons of pro and semi-pro basketball, Charlie Isles was a star for the famous New York Rens for many years, also putting in time with the Harlem Yankees, Washington Bears and the Harlem Globetrotters. He, along with his his teammates, were groundbreaking athletes in regards to breaking racial barriers. The all-black Rens and Bears drew very well on barnstorming teams, and the Bears even won the World Basketball Championship. The Harlem Yankees picked Isles up in 1949 when the team joined an organized league, the New York State League. He would play for the Yanks when the team migrated to the ABL.


Stats:
http://probasketballencyclopedia.com/player/charlie-isles/
Posted by Peach Basket Society at 9:28 AM