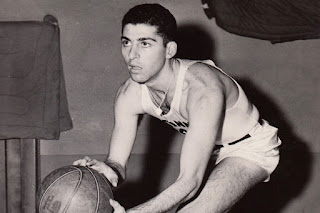 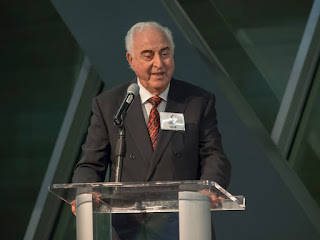 Laub graduated from Lincoln HS and enrolled at CCNY. After two seasons in school, he enlisted in the U.S. Merchant Marines for the remainder of World War 2, and would eventually be moved to the U.S. Coast Guard. After the war, he saw his eligibility reset, as was the case with so many college players who served in the war. He went to the University of Cincinnati and played four years, becoming the first (and to our knowledge, the only) college athlete to compete in six seasons of one the same sport. Laub was selected in the 9th round of the 1950 NBA draft by the Baltimore Bullets. However, he did not make the team and never played in the NBA. He would played with the Scranton Miners instead in 1951-52, and with the Pawtucket Slaters in the 1952-53 swan song season of the ABL. He left basketball in 1954 to work for Pfizer, which was the beginning of a long and celebrated career in the pharmaceutical industry. He was a leader in the movement to provide generic drugs and fighting the high price for medical treatment with pharmaceuticals.

Stats:
Posted by Peach Basket Society at 9:54 AM