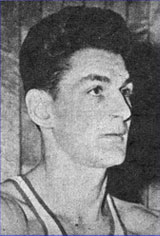 Kaufman lead DeWitt Clinton to the PSAL title, Kaufman entered the U.S. Army in July of 1945. World War 2 ended just a month later, and Kaufman was discharged in November of 1946. He would enroll at NYU and would star on their basketball team for the next three seasons. Drafted in the ninth round of the NBA draft in 1950 by the Philadelphia Warriors, Kaufman wound up playing three seasons in the ABL. In a doubleheader in Wilkes-Barre on December 16, 1952, Kaufman's Elmira club played Saratoga while Scranton and Wilkes-Barre clashed in the nightcap. Not having enough players to dress, Scranton asked for permission to borrow Kaufman for the game, which Wilkes-Barre and the league agreed to. Having scored 14 points for his Colonels in the first game, Kaufman added 15 for the Miners in Scranton's 73-69 loss. Kaufman was on business trip to California when  he died in 1972 at 45 years of age.

Stats:
Posted by Peach Basket Society at 4:16 AM